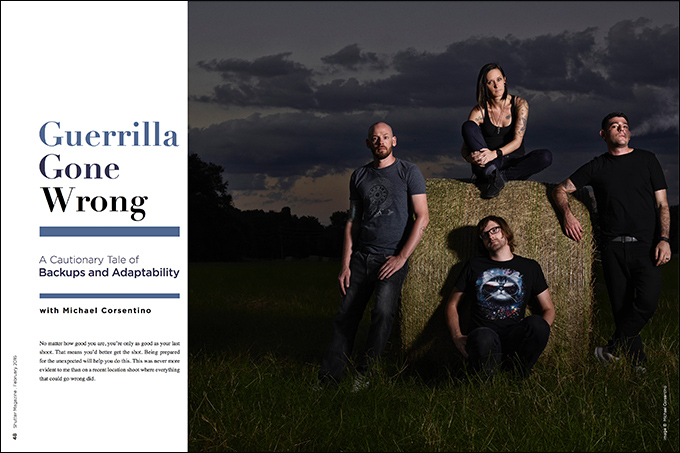 Guerrilla Gone Wrong: A Cautionary Tale of Backups and Adaptability with Michael Corsentino

No matter how good you are, you’re only as good as your last shoot. That means you’d better get the shot. Being prepared for the unexpected will help you do this. This was never more evident to me than on a recent location shoot where everything that could go wrong did.

Twice a year, the big open field by my house is dotted with countless round hay bales. I’ve been trying to get the Orlando rock band Blaine the Mono, which I do promotional work for, to do a shoot using the field and hay bales as a backdrop for the past two years. The bales don’t stick around long; they’re removed after a short drying period, so there’s only a limited window of opportunity. Due to scheduling conflicts, it hasn’t worked out until this year.

The Original Plan and the Adapted Plan

“Life is what happens to you while you’re busy making other plans,” as John Lennon famously said. This is one of my favorite quotes. It relates perfectly to the vagaries and joys of location photography. My original vision for the lighting and composition for this promo shoot of Blaine the Mono was one thing, but for reasons beyond my control, some happy and some not, what I ended with was something entirely different. The good news is through skill, preparation, a bit of luck and an open mind, I was able to make it work and produce a killer image.

I turned the photography lemons I got that day into lemonade, and so can you. It’s often said, and I believe it’s accurate, that the true mark of professionals is how they handle things when everything is crashing and burning around them. This shoot was the perfect storm.

Strike one: The band arrives an hour late, cutting heavily into setup time. Thankfully, all my gear—modifiers, lights, ladder, light stands, etc.—had already been packed up, so I was ready to go the minute they rolled up.

Strike two: Shortly after we arrive and start setting up, we narrowly escape getting busted for trespassing. Turns out the field we were in was private property, and we weren’t supposed to be there. We were allowed to finish up, but were told to be really quick and warned in the strongest terms that at any moment the agriculture police—yes, there is such a thing—could roll up and arrest us. Great, now I was sweating it! The band had traveled over an hour to get there, and I didn’t want it to be all be for naught. So we crossed our fingers and continued setting up.

Strike three: My Profoto 7B 1,200-watt second pack is dead on arrival. I’d tested it before the shoot, and it had been working fine. It must have been on its last legs, and I’d used the last few pops during my preflight testing. Things just kept getting better!

The pressure was on. We were losing the sun, the cops might be showing up at any moment and I had to scramble to come up with an alternate plan to salvage this shoot in a hurry. My initial plan was to shoot with a 74-inch Elinchrom Octa, placed to the right of and between 10 to 15 feet away from the band. I needed a lot of light because of the size of this modifier, my indirect light source and the distance involved. Hence the 1,200-watt second pack, which was now out of the picture.

I always bring a spare head or two, so I had a Profoto B1 on hand, but that’s only 500 watt-seconds. So the Elinchrom Octa was now also out of the picture. But I’d need a different modifier, one that would work with the lower-powered B1 and provide enough output and coverage for the group shot of Blaine. I’d brought along two Profoto 65-inch XL Umbrellas, one white and one silver, for extra options. I opted for silver for the extra output it would deliver, and accepted that I’d have a more specular look. It was a different look than I’d originally envisioned, but it ended up working in my favor.

After some quick testing and adjusting of the position and power of my light, we were ready to knock out the world’s quickest photo shoot. And we didn’t get arrested. Man, did we hightail it out of there.

Just as a flight crew checks all the systems on an airplane before taking off, photographers should be in the habit of testing their systems and components before a shoot. This has saved my butt more times than I can count.

It’s easy to be lazy and just throw everything into your gear bag and go, but you’re really rolling the dice. I sleep a lot easier prepping my gear the night before the shoot and taking the time to test all the systems to make sure everything is working and that there are no missing pieces. Funny thing about photography equipment: Even the smallest, least expensive, seemingly most inconsequential piece of equipment can cause an entire shoot to grind to an unceremonious halt if it’s missing or malfunctioning. Things like a broken PocketWizard, a missing memory card or a malfunctioning cord can derail your shoot in a heartbeat, so it’s important to be organized and prepared. I use a gear checklist to keep track of what I need to pack for location shoots and what needs to come back when we’re done.

The second but equally important part of being prepared is backups. Having backup gear and several modifiers on hand, especially on location, not only saves the day when systems fail but provides creative options when your initial concept doesn’t meet expectations. I always pack extra sync cords, an extra PocketWizard, an extra strobe and a few extra modifiers.

Remember, you’ve got people counting on you to produce. Taking the simple steps above will put you on solid footing and help you deliver the goods.

The Whole Is Always Greater Than the Sum of Its Parts

It’s tricky to describe the elements that differentiate a winning capture from the frame that came before it or after it—you just know it when you see it. As you can see by comparing the rejects to the final from this shoot, it’s the small things that make a big difference. The best images are the result of collaboration, either explicit or implied. Maintaining open communication with your subjects and team is key. Having an open mind and a willingness to not only accept but encourage input, think outside the box and deviate from your plan goes a long way toward keeping things spontaneous, energized and creative. I can’t recommend this enough.

Without this collaborative mindset, it’s easy to get stuck seeing things in only one way and missing out on the real magic that’s right around the corner. It’s about letting go and not being afraid to share the creative credit. This shoot was no different. Even though we were completely under the gun, with failing gear and a possible trespassing arrest looming, we worked together to create a winning image. Because I kept an open mind and was adaptable, the final image was so much better than the one I’d had in mind. By allowing the band to play a role in the creative process, we created a much stronger final.

Due to these events, there’s only one final from this shoot, but that was always the mission anyway. Anything else would have been gravy. There were other acceptable images, but the final was the clear winner. I kept post simple using a combination of Capture One Pro and Google’s Nik Color Efex Pro Bleach Bypass effect. I tinted back the effect so it didn’t overwhelm the image, and added a few empty layers to my layers stack set to soft light blending mode for burning and dodging where necessary. If you haven’t tried this method, check out this month’s video for a short demo.

At the end of the day, it’s all about getting the shot. Be prepared and flexible, bring backups and alternates, and have the ability to think on your feet. These are the tools you need to get the job done no matter what comes your way.

with behindtheshutter time to read: 8 min
Business 12 Marketing Tips for 2016 with Skip Cohen
Photography 5 Ways to a Better Photography Education with Leon…
0
×