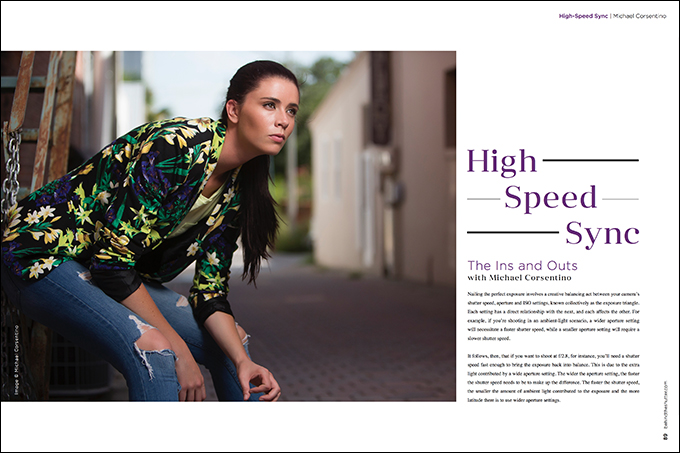 Want more information on this article? Get access to video content and additional supporting images. Launch the August issue of the magazine by logging in or signing up for a free account by clicking here. Shutter Magazine is the industry’s leading professional photography magazine.

Things get interesting when you shoot with a mix of flash and ambient light. If you’re comfortable shooting at apertures hovering around f/11 to f/16, than you’ll be fine straight out of the gate. But if wider apertures are what you’re after, that’s when things start to break down. This brings us back to balancing the exposure. Wide apertures necessitate fast shutter speeds, and with a mix of flash and ambient, you often end up needing really fast shutter speeds. So fast, in fact, that they outstrip the camera’s maximum flash sync speed—or “X” speed—which is typically between 1/200 and 1/250 of a second. That’s where high-speed sync (HSS) saves the day. HSS allows the use of shutter speeds far beyond the camera’s X sync speed, generally up to 1/8000 of a second. This means significantly more creative flexibility in aperture settings.

I’ll cover three of the most useful applications and benefits of high-speed sync. First, let’s delve into a few essential concepts.

In this article, I’m specifically addressing DSLRs with mechanical focal plane shutters, those with front and rear shutter blades typically referred to as curtains. Leaf shutters and electronic shutters with no rear curtain do not apply for the purposes of this discussion.

At shutter speeds above the camera’s maximum flash sync speed, exposures made with flash will only be partially illuminated by the flash. You’ve probably experienced this phenomenon’s telltale horizontal underexposed band across the image.

At shutter speeds above the camera’s maximum flash sync speed, the front and rear curtains travel across the sensor in unison, creating a small slit through which light can pass. The width of the slit created is dependent on the shutter speed. The shorter the duration, the narrower the width of the slit created. This is what’s responsible for the underexposed horizontal black band mentioned earlier. The reason is that at no time during the exposure has the entire sensor been visible to the light from the flash. Therefore, only a portion of the image has been illuminated by it.

High-speed sync solves this problem by instructing your speedlight or HSS-enabled strobe to fire a rapid series of flash bursts during the entire length of exposure. This ends up illuminating the entire surface of the camera’s sensor as the front and rear curtains’ small slit travels across it. All is not wine and roses, though; I’ll discuss HSS’s inherent compromises below.

High-speed sync was created to permit the use of shutter speeds that exceed your camera’s maximum sync speed. The advantage is access to wider apertures in ambient and flash mixed scenarios. HSS is available exclusively using the TTL (through-the-lens) exposure mode since it relies on the camera to calculate the correct amount of flash output based on your aperture and ISO settings necessary to create a solid exposure.

You’re not stuck with the exposure the camera gives you. If you know what you’re doing, you’re still completely in control. Remember, shutter speed controls the contribution of ambient light, flash exposure compensation (FEC) controls the contribution of flash +/– three stops, and aperture governs both the amount of flash and ambient light contributed, as well as depth of field. ISO controls the camera’s sensitivity to light, making your shutter speed, aperture and flash settings more or less powerful overall. FEC can be found in the menu systems of many cameras, on the camera body itself, on handheld flash units, and on remote control transmitters and strobes. ISO affects the “volume” of these controls overall by determining the camera’s sensitivity to light.

Using TTL also doesn’t relegate you to using one of the camera’s automatic exposure modes. Even though your flash is set to a semiautomatic TTL metering mode, your camera controls can remain fully manual, allowing you maximum creative control.

Alternatively, aperture priority (AP) mode can be used to set the desired aperture, allowing the camera to determine the shutter speed used as you shoot. I prefer working completely in manual mode, which lets me determine exactly how much ambient light to contribute to the exposure via my shutter speed settings.

You certainly could use ND filters to achieve a reduction in light. But like all solutions, this one involves compromises. First, there’s the added expense of purchasing quality ND filters. I prefer Tiffen’s 4×4 glass filter over lens-mounted variable NDs, as they work with all my lenses regardless of their diameter. Using fixed nonvariable filters allows me to know exactly what the amount of filtration is and then adjust the exposure accordingly. They don’t come cheap, and you need to invest in a holder as well. I use a LEE Filters Lens Shade Filter Holder. Secondly, ND filters can substantially cut the amount of light entering the camera, making focusing a chore. Thirdly, they reduce light overall, meaning ambient light as well as light from flash. With high-speed sync, I have independent control of each light source.

Location portraits often benefit from the use of wide apertures. This is due to the pleasing bokeh they produce, the separation possible between the subject and background, and the reduction of unwanted, distracting background elements. If you use aperture to balance the exposure by stopping down, you’ll increase depth of field and therefore reveal more of those unwanted background elements. When you’re working with flash and ambient and want wide apertures, high-speed sync comes to the rescue. This is because HSS allows you to balance the exposure using shutter speeds that exceed the camera’s maximum shutter speed so you don’t have to rely on aperture.

This is essentially an offshoot of the above advantage. A wide aperture setting and a natural balance between flash and ambient are the goal. Here you’ll employ even higher shutter speeds to further knock down and underexpose the ambient light to create dramatic skies and cool day-for-night looks.

High-speed sync is great, but it isn’t without its tradeoffs. Here are a few important things to be aware of.

Depending on your power output needs and budget, you may want to consider larger, more powerful HSS-capable strobes, such as Profoto’s B1 and B2. They offer considerably more flexibility. You can do a lot with speedlights, but when it comes to high-speed sync, extra power can be a lifesaver.

Want more information on this article? Get access to video content and additional supporting images. Launch the August issue of the magazine by logging in or signing up for a free account by clicking here. Shutter Magazine is the industry’s leading professional photography magazine.