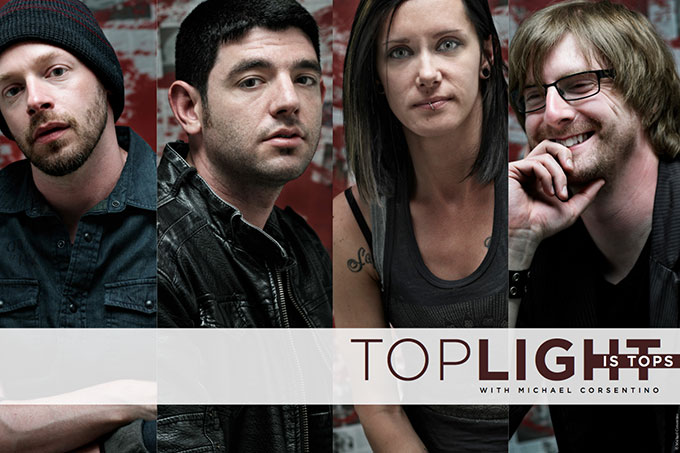 This portrait session of Orlando-based rock band Blaine the Mono is part of an ongoing series exploring different looks for its upcoming album and promotional efforts. It also represents a number of firsts for me: first time shooting with the incredible Phase One IQ250, first time using top lighting, first time experimenting with color grading in Capture One Pro 7 (covered in this month’s video) and my first time creating a custom background. Each turned out great, and the files from the IQ250 were mind-blowing. If you’re noticing a difference in the quality of the images and you can’t quite put your finger on it, that’s what it is! The detail and tonal range from medium format, and the RAW conversions from Capture One, created results unlike anything I’ve ever captured with a DSLR. I owe a big debt of gratitude to Dave Gallagher and his team at Capture Integration for their unparalleled tech support during my maiden voyage with the Phase One IQ250.

Don’t be afraid to deviate from your initial plan. If what you had planned for your lighting isn’t yielding the desired result, change it up! This shoot started off as a two-light shoot, with the key light placed directly overhead and a fill light to the left of my subjects. Initially I thought I’d need a little fill due to the deep shadows cast from the overhead key light. But after a few test captures, it quickly became evident that the fill light I thought I needed was in fact ruining the look I was ultimately after. In this case, the fill light was creating a quality of light that was too flat, not what I had in mind. This was because it was opening up the shadows more than I wanted, even at extremely low power settings. Consequently, it was killing the dramatic effect I wanted for these rock-and-roll portraits. I tried a few different positions and settings for the fill light just to do my due diligence. In the end, the portraits looked 100 percent better without this fill light, so I removed it. I opted instead for what turned out to be a much more successful one-light solution with an alternate fill source.