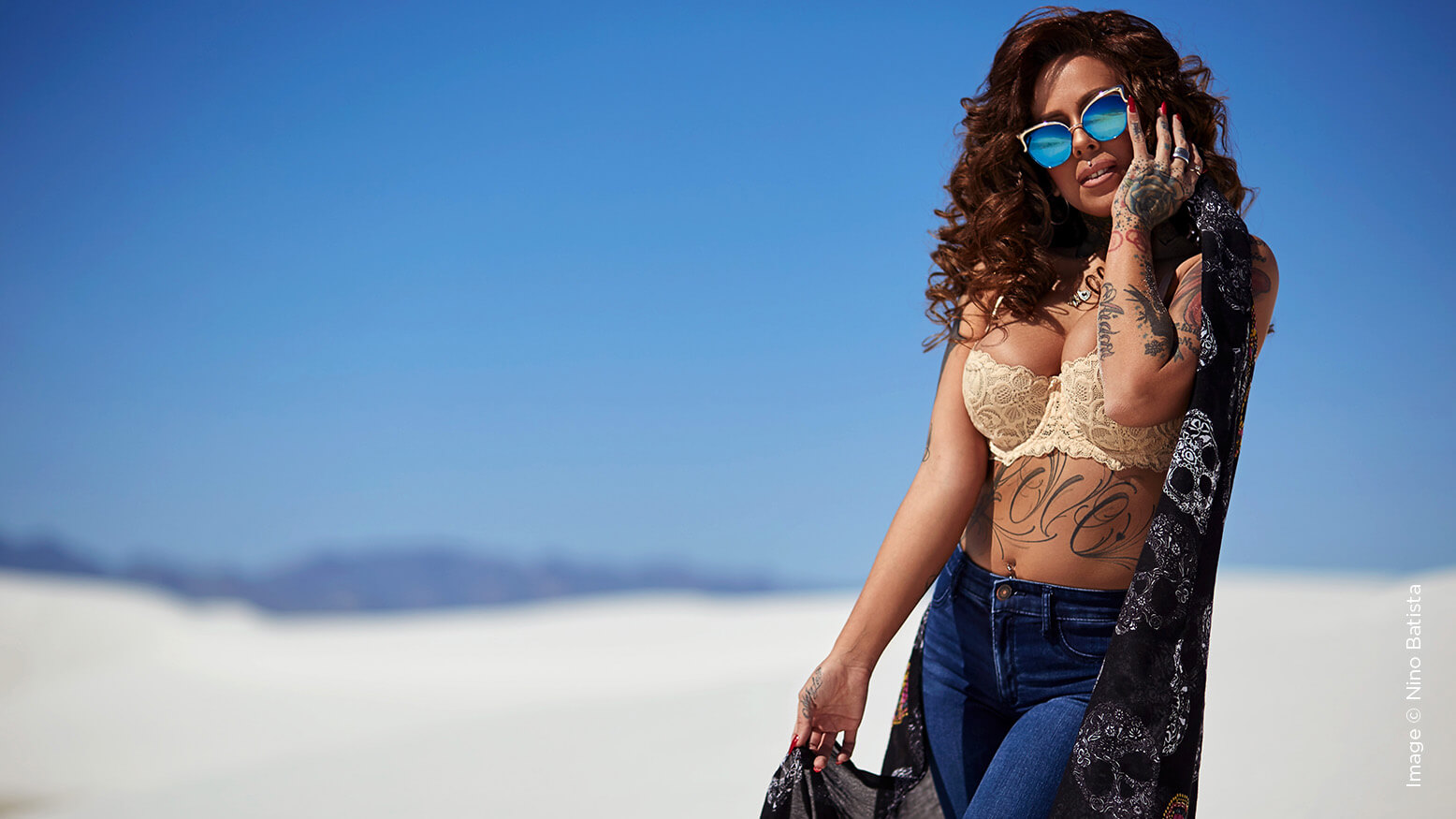 Editorial Glamour With an Indie Twist

Editorial Glamour With an Indie Twist with Nino Batista

Want more information on this article? Get access to video content and additional supporting images. Launch the October 2017 issue of the magazine by logging in or signing up for a free account. Shutter Magazine is the industry’s leading professional photography magazine.

If you’ve never been to White Sands National Monument in the gorgeous state of New Mexico in the American Southwest, you have truly missed out on an experience. It’s my favorite of the Southwest’s long list of travel hot spots, better even than the Grand Canyon, Death Valley, Carlsbad Caverns, the Valley of Fire and the Las Vegas Strip. This 275-square-mile patch of white gypsum in the desert sent my brain reeling with excitement and possibilities. So when an opportunity came along to produce a photography art book that needed one specific theme, I knew where I wanted it to be: White Sands, New Mexico.

I gravitate toward simple textures, shapes and colors in my work. If I am given the choice between two pieces of wardrobe, I almost always pick the neutral and simple items above highly textured, patterned, colorful garments. Playing with geometry in interesting ways is one of my key interests in framing a model in a scene, often so subtly that only I know it’s happening. In the case of White Sands, I saw what amounted to an endless sea of gently undulating white cycloramic wall—and I knew I had to go see it.

During a trip to El Paso for a workshop I was giving in early 2016, my host and team planned my very first excursion to White Sands. I was so eager to go create the first part of the project that I ended up scheduling seven or eight models for the day, sourced from towns in New Mexico and West Texas. Arriving at White Sands after the two-hour drive from El Paso it was exactly what I knew it be: mind-boggling. It was like visiting another planet, perhaps another dimension. It was better than I thought it would be. I was as giddy as a little kid to get shooting. I wasn’t the first to shoot here, not by a long shot, but I knew I would be coming back to this place again and again.

Unbelievably, a freak sandstorm cropped up during load in, and quickly became concerning enough for us to cancel for the day. Piercing gypsum particles and random chunks of nature pelted us for a good 20 minutes before we accepted the fact that it was starting to really hurt and that our equipment was also bearing the brunt. The decision was made, and about 16 of us hurriedly packed up everything and left in a mild panic.

Driving back to El Paso was a near-death experience as well, as the wind storm continued well outside the parameters of the white gypsum, rocking our vehicle side to side on the freeway (all while dodging massive tumbleweeds and other debris). I left with a newfound respect and healthy fear of the New Mexico desert. This was not a place to be trifled with.

Shaken but undeterred, we returned less than 48 hours later, but with far less modeling talent onboard due to scheduling challenges. I accepted that the first phase of the project would be significantly truncated, and that was ok. The good news was that White Sands was more glorious than ever that day, replete with cloudless electric-blue skies and a fresh smoothing over of the dunes thanks to the wind the previous couple of days.

Now on the dunes without fear of being stripped to the bone by high-velocity gypsum, I was finally able to snap test shots. It became immediately apparent that my usual second-nature outdoor shooting approaches didn’t apply at White Sands National Monument. Everything from white balance to overall exposure was far different than I expected, so I had to do more experimenting. And never mind the gigantic white reflector that reached for miles in every direction. This was going to be tricky, I thought.

Gear-wise, I knew what I wanted to work with, and it was a moderately controversial point among some of my peers there that weekend: I was bound and determined to use my 85mm to capture most of the project. Some of my associates strongly suggested I employ far wider focal lengths to capture the environment, but I was hell bent on seeing how I could make my favorite focal length work.

I didn’t go all that way to White Sands to capture images that looked shot at a beach or some other generic location near my house. I knew I had to showcase the location as much as I could while still working with my preferred approach to capturing portraits. This was not a time for me to experiment with 14mm primes or anything similar. I knew what I wanted to do.

The terrain looks appealing, simple and gentle when you first start to wander around. It becomes evident very quickly how hard it is getting around the location with equipment in tow. Thirty-foot dunes of pure gypsum cause you to slip and slide (and sink!) far more than usual sand, and the dry air can cause you to gasp for air if you’re from the coast like I am.

I was breathing hard from climbing dunes with gear, and had boots and jeans filled with gypsum, all within 15 minutes of shooting. You fall down a lot on dunes that flow like water under your feet. More than once I found myself on the ground laughing at the challenges of the environment.

Did I mention the never-ending gentle breeze that works to smooth out and effectively erase your footprints within minutes? After you’ve summited two or three large dunes, you find you have no idea what direction you came from if you don’t pay attention. Have people died in White Sands after getting lost? “Absolutely,” the very nice woman at the visitor center told us as we were headed out that day.

The brightness of the sun at White Sands during a cloudless day was staggering. Since you’re squinting like mad, you assume it is as bright as a usual summer day at the beach, but that is a mistake. It’s far brighter than any beach I’ve experienced. I used a 0.9 neutral-density filter to control the light enough to use apertures wider than f/2.8, even at ISO 50 and 1/8,000th shutter speed.

About 30 minutes into this ordeal, I became concerned that I wasn’t going to get any shots I liked because I was so distracted by the enigma of the lighting and difficulty of the terrain. There are hotter deserts and more dangerous locations, of course. But what started as inspiration quickly became frustration as my first few sets left me feeling flat.

I paused to review what I had and to give myself a pep talk about how I didn’t come all the way out there, get run off by a sandstorm and return within two days again just to give up.

Eventually I found a decent groove, and began to understand what the environment was giving me to work with. Essentially, any direction “worked.” I stopped thinking so much about the composition process. If I climbed a dune and it looked great but I found I could not get the model in a spot I liked, we just moved 25 feet in any direction and tried again. After a while, what felt limiting at first became hugely liberating—everything seemed to work. No, not every single frame snapped, but every angle and every experiment led to results I was enjoying as long as I didn’t overthink things.

I went into a sort of organic mode of shooting, with little regard to anything technical after I dialed in settings on the camera that seemed to work. One key thing was that my gut instinct to shoot about two-thirds to a whole stop underexposed ended up being crucial in post-processing. The pure white gypsum is so bright, it can easily become overexposed into a giant hot spot in a heartbeat, especially if you’re focused on proper exposure of your subject. Shooting under allowed me to retain the details and texture of the gypsum on most of my shots, and a little noodling in Capture One Pro later on gave the shots the final pop of contrast and color I wanted.

I imagine I could have simply driven down to South Padre here on the Texas coast and put together a series of editorial images, but what’s the challenge in that? The book project remains incomplete as of September 2017. While I did return to White Sands again earlier this year (no sandstorms this time!) I knew I needed a third visit to finish the project I had envisioned.

The images in this article are part of the 75 final images that will appear in my book. I plan to return in fall 2017 or winter 2018.

Editorial Glamour With an Indie Twist 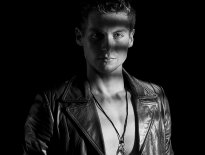 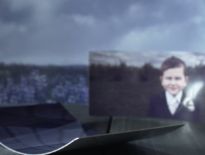